This year’s Brafa is full of gems by the masters of modern Belgian art from Ensor to Michaux, including Spilliaert and Magritte.

How has Belgium, this flat country that is modest in size and population, been able to generate these heights of modern art? How does what it has produced cross boundaries so easily? One answer is undoubtedly connected to the rise of the young nation (1830), to the blossoming in the 19th century of art that was at the very least particularly mental and geographical, if not identitarian.

Still little known in France, the school of Sint-Martens-Latem, the Belgian Barbizon, supported by Galerie Oscar de Vos (based in the small eponymous Flemish town), was the melting pot of an impressionist vein around Émile Claus, an artist also found at the Francis Maere Fine Arts Gallery in Ghent. However, in the early 1900s Belgian art mainly focused around a paradigm, interiority, and a prolific means of expression, symbolism. One of his fellow travellers was the famous poet and critic Émile Verhaeren to whom the Museum of Fine Arts in Ghent has just paid tribute.

At Brafa the Brussels gallery Harold t’Kint de Roodenbeke is exhibiting a park perceived by a master of the genre, Léon Spilliaert (1881- 1946), reknowned for his silhouettes lost in endless perspectives. He is joined by another key figure from the period, James Ensor (1860-1949), the greatest Belgian painters. Verhaeren commented that his monumental drawings ‘called to mind oversized Rembrandts (…) executed during hallucinations’. There are two scenes returning from (victorious) battle displayed at the stand and another, in black pencil, depicting Napoleon at the bleak lowlands of Waterloo… The recent world record obtained by Squelette arrêtant masques at Sotheby’s in December in Paris (7.3 millions euros), while the artist is entitled to a retrospective at the Royal Academy of Arts in London (until 29 January), is judged ‘a particularly high price’ by Harold t’Kint. The same dealer also bought at auction several works by Delvaux (1897-1994), including a painting from 1960 that is, ‘interesting as it is not a classical Delvaux, but amaze of gardens and naked women immersed in a Magrittian nocturne’, he admits. Allow for between 700,000 and 1 million euros to buy yourself this enigmatic painting originally bought directly from the artist, and that has never re-entered the market since.

London gallery Stern Pissarro, for its part, is fittingly exhibiting Nocturne, a painting by René Magritte (1898-1967) from a British collection, a work worthy of opening the exhibition on the artist at the Centre Pompidou in Paris concluding on 23 January. The work dates from 1923, just before the artist’s turning point towards surrealism. ‘These initial works are a rarity on the market, Nocturne highlights the influence of cubism on his style, while showing on the legs the delicate blend of colours that was one of his hallmarks’, explains the gallery, demanding 625,000 euros for it.

Delvaux appears again at Galerie AB. The Parisian gallery is exhibiting a 1933 watercolour, La Famille, which was part of two exhibitions about the artist, one in 1977 at the Royal Museums of Fine Arts of Belgium, in Brussels, the other in 1973 at the Museum Boijmans Van Beuningen in Rotterdam. Fast-forward to post-war the same gallery is exhibiting four ink drawings by the writer, poet and artist with French citizenship, Henri Michaux (1899-1984). The price of each sheet, produced between 1965 and 1980, is less than 30,000 euros. Those attracted to the less beaten path will linger on the stand in front of a large abstract oil painting by Joseph Lacasse (1894-1975), an artist for whom Agnès Aittouarès observes, ‘an international buzz with purchases by the English’. Dated 1946, it recalls the contemporary work of Poliakoff, at ‘only’ 35,000 euros…

Lastly, the Galerie des Modernes (Paris) is presenting just one Belgian work, a painting by Corneille, at less than 150,000 euros. The painting Le Lent Soleil Noir neither belongs to the famous CoBrA period nor to the more recent endless figurative cycle, but to the so-called ‘geological’ one, marked in the middle of the 1960s ‘by a spirit of innovative research, the palette and style of which are quite similar to those of Dubuffet’, evaluates the gallery’s co-director, Vincent Amiaux. In terms of modern art, many paths undoubtedly lead to Belgium. 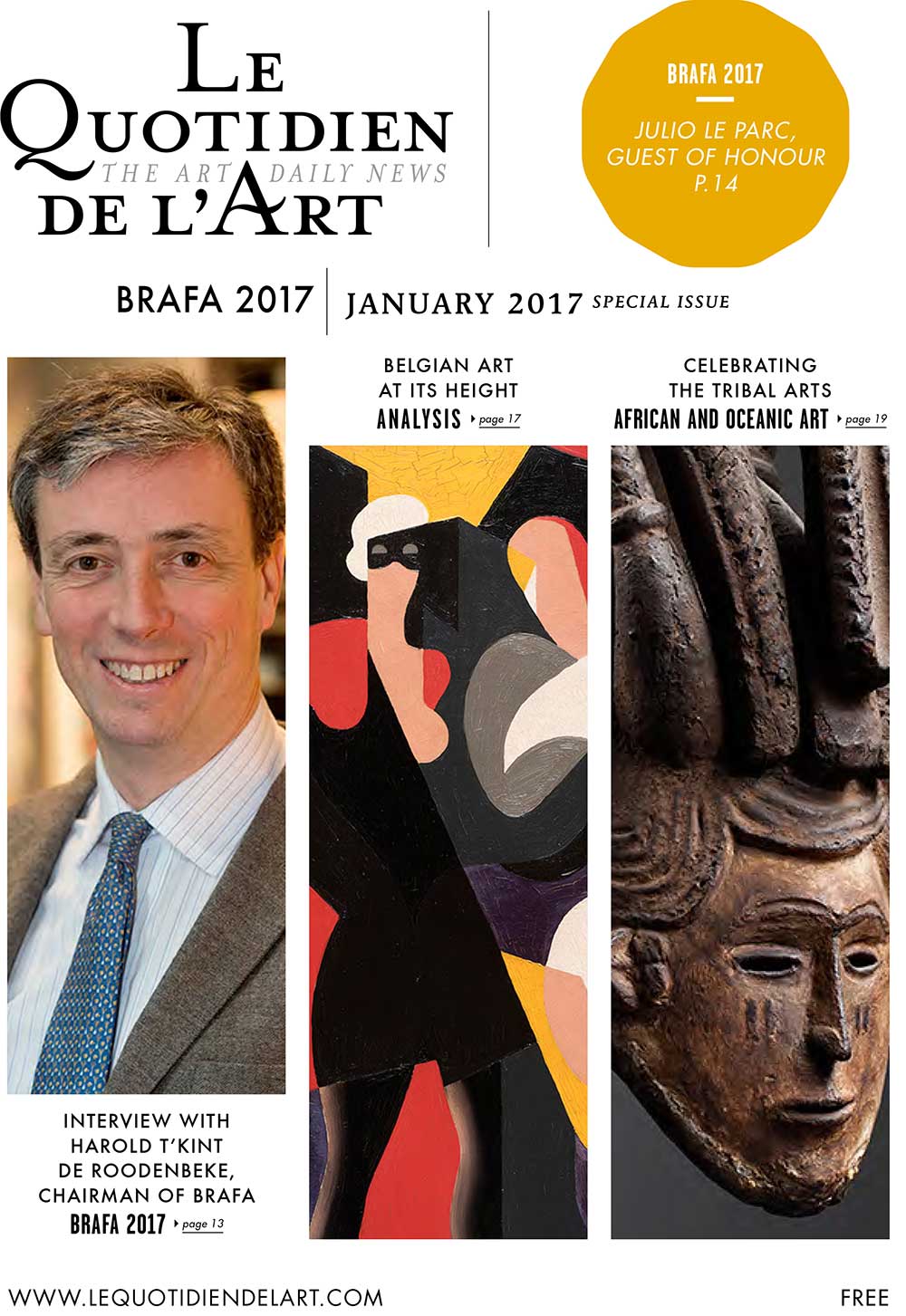 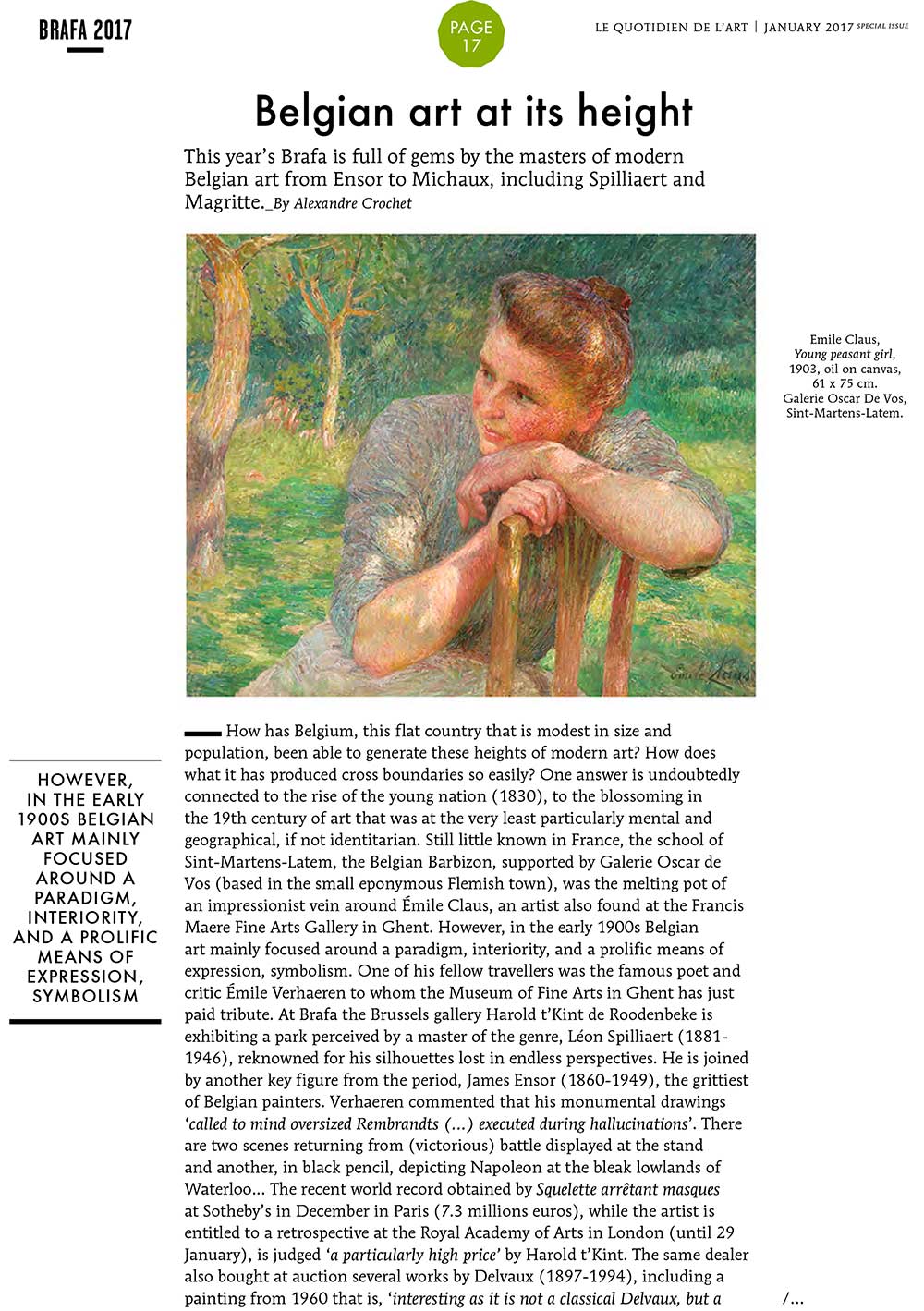